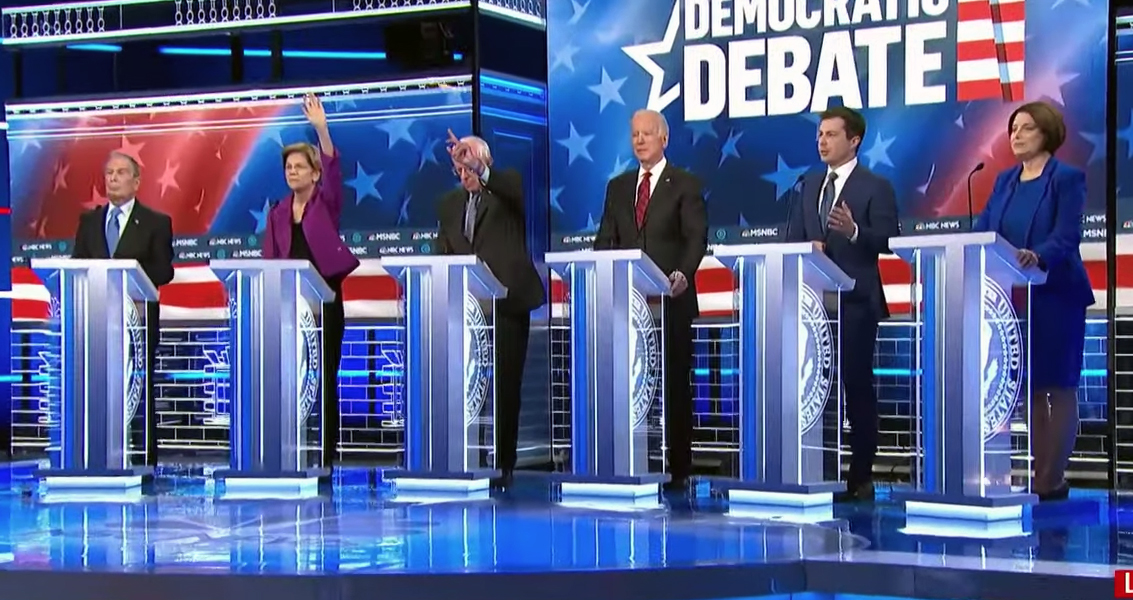 Here’s my completely subjective take on the debate in regard to each of the candidates, from left to right on the stage:

Bloomberg: Really awful night. This illustrates the difference between illusion and substance. People have been buying the illusion of his monolithic advertising push and he’s been going up in the polls based upon his terrific public relations campaign. Last night he finally had to campaign and face fire, and got battered with actual facts and it wasn’t pretty. He had some good points in regard to climate change and there were a few moments he did ok, but largely he got nailed, and justifiably so, on his history as a Republican who has made some poor decisions in and out of office. It’s interesting to me that the monied elite of the DNC is so eager to embrace this guy, a former Republican who is decidedly right of center, but they’re so quick to attack and demonize Bernie, who is so much closer to their alleged beliefs. Could it be because the DNC cares more about money and supporting the elite than they do about the actual principles they say they stand for? Hmmm… At any rate, not a good night for Bloomberg. Watch for him to start slipping in the polls.

Warren: The undeniable winner of the debate and the night. This is the Liz Warren I fell in love with as a politician, who I wanted to run in 2016, spitting fire and raining down hell on the mega-rich and powerful. I loved it. In previous debates she disappeared or seemed uncertain and the polls reflected that. But it’s almost like now with Bloomberg on the stage she actually has a real foil who pisses her off and that’s bringing out the best in her. She faced off against attacks well and punched back harder, and man, she really brought the heat. Bravo. Expect a real bump for her in the polls and a strong second or third place finish in Nevada. Keep it up! I like her as a candidate, and this is what we need to keep the fire of the progressive wing burning hot!

Bernie: Great night for Bernie as well, who was likewise spitting fire on Bloomberg, and who, once again, stood up tough against both his opponents on stage and the media bias off stage. He made Chuck Todd look like the craven boob he is and along with Warren inflicted major damage on Bloomberg. Some people clutch their pearls at all this conflict. Not me. This is a great preparation for Trump, who is going to be a savage bully on the campaign, and the Dem candidate needs to be prepared for that constant attack. You want to beat Trump? You have to punch that bully in the nose and get in there and fight. The way Sanders keeps deflecting shots and staying on message and fighting back bodes well for him against Trump. I’ve said this before, I’ll say it again, the Dems strongest ticket would be Sanders and Warren united. Sanders is strongly ahead in polls in Nevada, expect him to win by a much larger margin than Iowa and New Hampshire and continue to build on his numbers.

Biden: This could finally be the turning point for the former VP. He had a great night, by far, by far, the best night he’s had on the debate stage. He had some great points, he made some excellent points that highlighted his experience, looked fired up and ready to rock, and didn’t take much damage at all, since most of the candidates seemed dead set on nailing Bloomberg. Biden has looked like crap thusfar, but he’s on an easier path forward with his poll numbers looking good in South Carolina and Super Tuesday states. With Bloomberg likely to drop, expect Biden to surge again. He’ll finish either a strong second or third (he and Warren will finish strong behind Bernie) in Nevada, and the typically dumbass media will start drooling over him as the frontrunner again without really grasping why. I think we’re starting to see a bigger picture here, and that bigger picture is that the Dems’ destiny is either a ticket of Sanders and Warren, or Biden and Pete. I think both would be good against Trump, I’d support both. I’d prefer the progressives. But I would vote for Biden/Buttigieg. That’s a solid centrist ticket there.

Pete: Early on through the end of the last debate, he was smooth and winning and looking fantastic. Then came the question about his record with African-American arrests in South Bend, and since then, he’s looked a bit off and shaken. His smoothness is still pretty good, but not as sparkling as it once was. I think his lack of experience taking this kind of fire and having a target on him is showing, and he’s starting to fade. His poll numbers in upcoming states and nationwide are not good, and his showing last night isn’t likely to change that. He took his own share of shots from people and didn’t necessarily shake them off well. The big conflict between him and Amy really hurt them both, and neither is polling well in Nevada or any other state moving forward. I still find him incredibly intelligent and impressive, but at this point, I think he’d be best as the vice president to Biden if Biden gets the nomination. He’s got a great future; maybe we see a Pete 2028 campaign as a winner after eight years of him and Biden. He’ll finish a distant fourth behind Sanders, Warren and Biden in Nevada; if he isn’t able to turn it around in South Carolina, he may not make it to Super Tuesday, especially if Biden continues to surge and take away that centrist momentum.

Klobuchar: She had a fantastic showing last debate, won that night, looked terrific, but not last night. Last night the only candidate that was hurt more than her was Bloomberg. She did not handle attack well, and the question about the Mexican president and policy really put the dagger in, because she got skittish and nervous, and man, if you can’t handle this, forget about facing Trump. Pete really hurt her the most, too. That lengthy skirmish between them was not good for either. Her polling in Nevada isn’t good, her polling beyond isn’t good, her financial situation reportedly is not good. I don’t see her cracking five percent in Nevada, which means no delegates or momentum, and I predict she may not make it to South Carolina. She’ll very smart and accomplished and has some good ideas; she’ll be a good addition to the cabinet of whichever Dem wins.

Sean Leary
Sean Leary is an author, director, artist, musician, producer and entrepreneur who has been writing professionally since debuting at age 11 in the pages of the Comics Buyers Guide. An honors graduate of the University of Southern California masters program, he has written over 50 books including the best-sellers The Arimathean, Every Number is Lucky to Someone and We Are All Characters.
See More Articles From Sean Leary
Tagged: Amy KlobucharBernie SandersDemocratic debateDemocratic primaryelection 2020Elizabeth WarrenJoe BidenMichael BloombergPete Buttigieg