So, I think I’ve only had to re-record ATARI BYTES 299, featuring ASSAULT from 1983, once due to technical glitches. But I’ve seen enough science fiction to know I could be caught in some sort of time loop. This could be my 8,000th recording. Is the game worth eternity in this one moment? Well, it was made by a company called Bomb. Hmmm.

Thanks to Kevin McLeod at Incompetech.com for creative commons use of his songs “Take a Chance”, “Pinbal Spring” and “Reformat”.

Thanks to Sean Courtney for the “Storytime” theme.

www.carnivalofgleecreations.com has info about this show ATARI BYTES here, about my other show IT’S A PODCAST, CHARLIE BROWN here and about books I’ve written, like 2nd Dog on the Right & Other Very Short Stories here.

Support the show at patreon.com 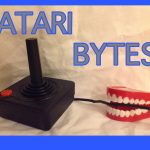 Is Answer Software's 1983 title GAUNTLET the answer to all our gaming needs? Hold your water and listen to episode 324. Raise a glass to not spilling a glass. No, really. Look, just listen to the...

Episode 323 is a bargain. I mean, not like cheap socks or 2-for-1 toasters like you could get at Zellers in Canada in the 1980s. (I'm just guessing about that.) But in this episode, we're playing...

No Christmas content really this episode, but it's dropping on Christmas Day, so...MERRY CHRISTMAS! Hope you and yours have a lovely day and joyous holiday season! Here at the podcast, we're relaxing...